Some of our year 5 pupils are feeling very lucky since they won a contest to meet Terry Deary, the author of The Horrible Histories books, in 'Bolton Museum's new Egyptian exhibit'. This fabulous opportunity was only open to one class in the whole town. 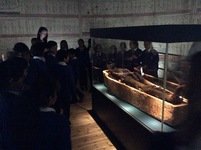 To win, pupils had to create a piece of work that would convince Terry that they were big fans. You can see the winning movie on the website home page. At the event on Monday he told students gruesome stories from Edwardian, Viking and Tudor times, sang songs, told jokes and spoke to the pupil's about his inspiration for being a writer. He also revealed that he hasn't led a workshop for school children for over 20 years, so the pupils were extra privileged to attend the workshop.